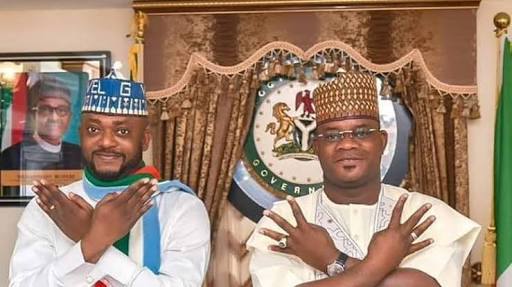 Ahead of the November 16th Gubernatorial election in Kogi State, the APC has embarked on Ward to Ward and House to House  campaigns in Imane  1,  2, Ade and Okpo after a triumphant entry by Chief Edward Onoja, the Deputy Governor into his home Local Government Area .
The visit was shortly after his swearing in as the Deputy Governor.
Onoja who is also the running mate to GYB in the election, was accompanied by who is who from the area and beyond on the visit which could be described as a celebration.
They included Adejo Nicodemus Friday, Chief Administrator Olamaboro LGA, Joshua Emmauel  Onoja APC State Secretary, Anthony Bobby Member Rep. Olamaboro in KGHA ,Engr.Sunny Okoh D.G Campaign Olamaboro , Benue State APC Chairman and other top Government functionaries APC stalwarts.
Addressing the mammoth crowd , the Deputy Governor and running mate to GYB, Chief Onoja  charged the people to remain steadfast ” on this journey to victory before and during the elections”.
Onoja tasked them to keep sensitizing everyone from house to house preaching the *#BelloOnoja Agenda.* .
He stated that the position of Deputy Governor has  come to stay in Olamaboro Local Government Area for the good of the 10 Wards in particular and  the 21 LGA in Kogi state as a whole when reelected in November 16th.
At the occasion, all the Chairmen promised to deliver their Wards to the ruling party , APC  in the election.