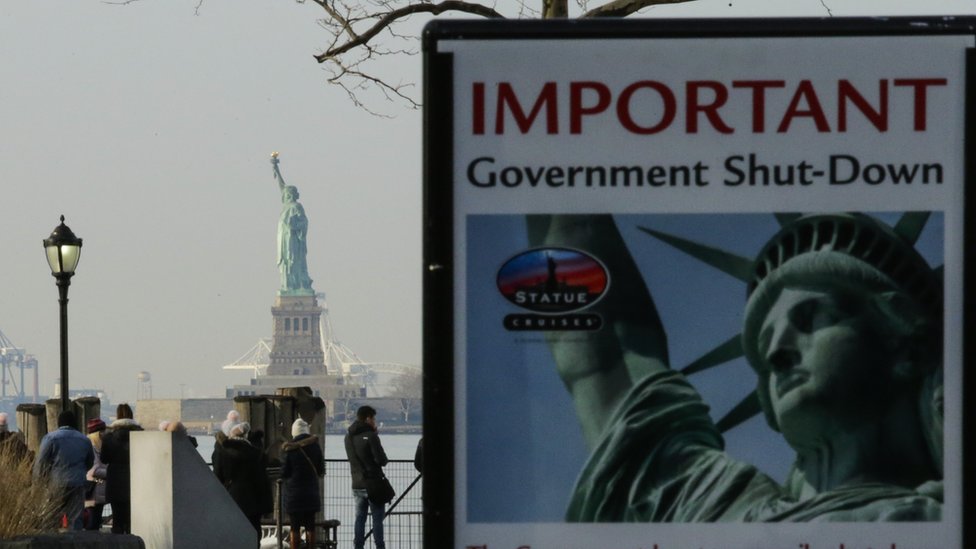 Hundreds of thousands of federal workers will be unable to report for work on Monday, as the US Senate struggles to end a government shutdown.

Some will not be paid until the stalemate is resolved.

A rare Sunday session of the Senate yielded no agreement between Democrats and Republicans, with immigration one of the main sticking points.

Essential services will still run but famous sites such as the Statue of Liberty have already been affected.

The monument was closed on Sunday but New York Governor Andrew Cuomo said he would dip into state funds to pay the daily employment bill and reopen the popular tourist site.

Why has the government shut down?

It missed a deadline. At midnight on Friday, lawmakers failed to agree on a spending bill. The bill was not a plan for funding for the whole of 2018, but would have kept things running until the middle of next month.

Democrats refused to back a temporary deal until their concerns on immigration reform were dealt with.

Efforts to reach a compromise ahead of the working week failed late on Sunday.

A vote to end the shutdown was postponed until midday (17:00 GMT) on Monday, meaning many federal government offices will not open.

Under Senate rules, the bill needs 60 votes in the 100-member chamber.

The Republicans currently have 51 senators, so they need some Democratic support to pass a budget.

Democrats want President Trump to negotiate over immigration as part of a budget deal, but Republicans say no agreement is possible while federal government services are closed.

Republicans want funding for border security – including a proposed border wall with Mexico – and immigration reforms, as well as increased military spending.

On Saturday, Mr Trump said the “nuclear option” of a simple majority vote was necessary to end the impasse.

Great to see how hard Republicans are fighting for our Military and Safety at the Border. The Dems just want illegal immigrants to pour into our nation unchecked. If stalemate continues, Republicans should go to 51% (Nuclear Option) and vote on real, long term budget, no C.R.’s!

What does a shutdown mean?

It means no pay for those federal employees who are “furloughed” – on unpaid leave – even though their workplaces are not open.

Most staff in the departments of housing, environment, education and commerce will be staying at home on Monday. Half of workers in the treasury, health, defence and transportation departments will also not be going to work.

Visa and passport processing could be delayed.

And the Trump administration said it planned to keep national parks open – their closure in the 2013 shutdown provoked an angry public reaction.

The shutdown began on the first anniversary of President Trump’s inauguration. His trip to the World Economic Forum in Davos, Switzerland, next week has also been called into question.

The last government shutdown was in 2013, and lasted for 16 days.

It cost the government $2bn in lost productivity and led to “significant negative effects on the economy”, the OMB said at the time.

Why can the two sides not agree?

This is the first time a government shutdown has happened while one party, the Republicans, controls both Congress and the White House.

Friday’s vote fell 50-49, far short of the 60 needed to advance the bill. This is due to a number of key disagreements.

Democrats have demanded protection from deportation of more than 700,000 undocumented immigrants who entered the US as children.

“I hope it is just a matter of hours or days. But we need to have a substantive answer, and the only person who can lead us to that is President Trump. This is his shutdown,” Democratic Senator Dick Durbin told the CBS network on Saturday.

But Vice-President Mike Pence reiterated his party’s stance in a speech to US troops in the Middle East on Sunday.

“We’re not going to reopen negotiations on illegal immigration until they reopen the government and give you, our soldiers and your families, the benefits and wages you’ve earned,” he said.