US shutdown: Senators trade blame ahead of new vote 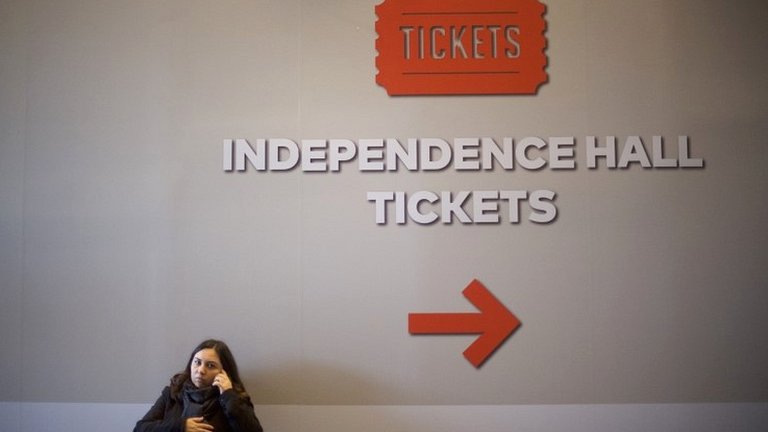 US senators are attempting to agree on a bill to fund the government, which is in its second day of shutdown.

However Democratic and Republican senators have so far largely traded blame for the shutdown.

Democrats want President Trump to negotiate over immigration as part of a budget deal, but Republicans say no deal is possible while federal government services are closed.

Mr Trump has called for a simple majority vote to end the impasse.

Under Senate rules, the bill needs 60 votes in the 100-member chamber to overcome blocking tactics by opponents.

The Republicans currently have 51 senators and would need some Democratic support to pass a budget.

But Mr Trump said the “nuclear option” of a simple-majority vote was necessary.

Great to see how hard Republicans are fighting for our Military and Safety at the Border. The Dems just want illegal immigrants to pour into our nation unchecked. If stalemate continues, Republicans should go to 51% (Nuclear Option) and vote on real, long term budget, no C.R.’s!

Republican senate leader Mitch McConnell has said there will be a vote at 01:00 on Monday (06:00 GMT) on a bill to fund the government until 8 February.

On Monday the closure of many federal services will be felt around the country and hundreds of thousands of federal staff face unpaid leave.

The last government shutdown was in 2013, and lasted for 16 days.

Why can the two sides not agree?

This is the first time a government shutdown has happened while one party, the Republicans, controls both Congress and the White House.

Democrats have demanded protection from deportation of more than 700,000 undocumented immigrants who entered the US as children.

“I hope it is just a matter of hours or days. But we need to have a substantive answer, and the only person who can lead us to that is President Trump. This is his shutdown,” Democratic Senator Dick Durbin told the CBS network.

Republicans want funding for border security – including the border wall – and immigration reforms, as well as increased military spending.

Speaking to US troops in the Middle East, Vice-President Mike Pence reiterated his party’s stance.

“We’re not going to reopen negotiations on illegal immigration until they reopen the government and give you, our soldiers and your families, the benefits and wages you’ve earned,” he said.

What is a government shutdown?

The US budget must be approved by 1 October – the start of the federal financial year.

But Congress has often failed to meet this deadline and negotiations continue well into the new year, with the previous year’s funding to federal agencies extended on a temporary basis.

Because Congress failed to agree an extension, many federal agencies effectively closed for business as of 00:01 on Saturday (05:01 GMT).

Most staff in the departments of housing, environment, education and commerce will be staying at home on Monday. Half of workers in the treasury, health, defence and transportation departments will also not be going to work.

And the Trump administration said it planned to keep national parks open – their closure in the 2013 shutdown provoked an angry public reaction.

The shutdown began on the first anniversary of President Trump’s inauguration. His trip to the World Economic Forum in Davos, Switzerland, next week has also been called into question.

What happened during the 2013 shutdown?

Many federal employees were forced to take a leave of absence – officially known as being furloughed – during the 16 days of shutdown.

It cost the government $2bn in lost productivity and led to “significant negative effects on the economy”, the OMB said at the time.

Donald Trump laid the blame for the shutdown with the then president, Barack Obama.

Federal workers cannot get paid for days worked during a lapse in funding. In the past, however, they have been repaid retroactively even if they were ordered to stay at home.