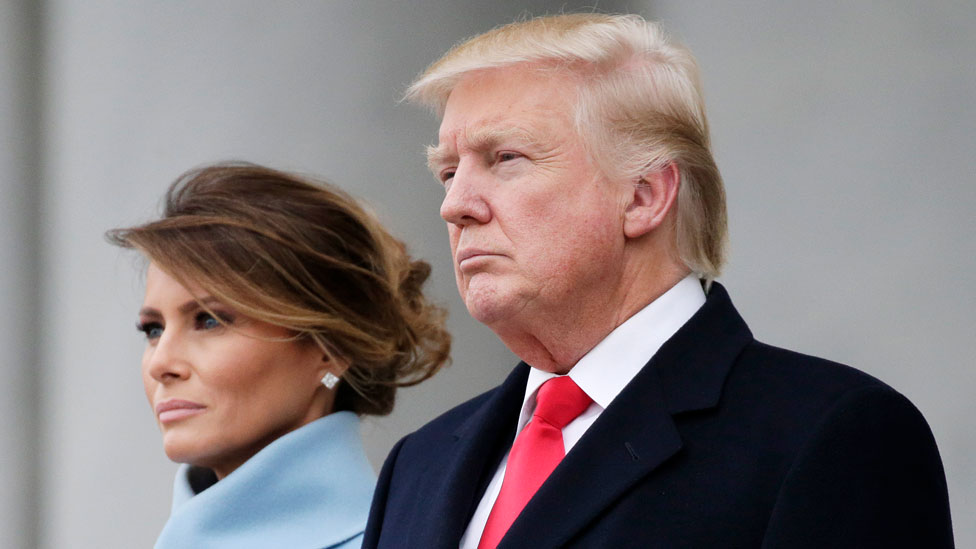 Donald Trump was “befuddled” by his election win, did not enjoy his inauguration and was scared of the White House, according to a new book.

The book details Mr Trump’s regard for media titan Rupert Murdoch, though the admiration was apparently not mutual.

Michael Wolff’s book was reportedly based on more than 200 interviews.

The author says he was able to take up “something like a semi-permanent seat on a couch in the West Wing” following the president’s inauguration for a close-up insight into the administration.

Here are 10 of the book’s revelations, with commentary from the BBC’s Anthony Zurcher.

According to the book, former White House chief strategist Steve Bannon thought a meeting between Donald Trump Jr and a group of Russians was “treasonous”.

The Russians had offered Donald Trump Jr damaging information on Hillary Clinton at the June 2016 meeting.

Wolff writes that Bannon told him of the meeting:

“The three senior guys in the campaign thought it was a good idea to meet with a foreign government inside Trump Tower in the conference room on the 25th floor – with no lawyers. They didn’t have any lawyers. Even if you thought that this was not treasonous, or unpatriotic, or bad s***, and I happen to think it’s all of that, you should have called the FBI immediately.”

Bannon reportedly said the Justice Department investigation into links between the Trump campaign and Moscow would focus on money laundering, adding: “They’re going to crack Don Junior like an egg on national TV.”

Anthony Zurcher: In just a few sentences, Bannon manages to detonate a bomb under the White House’s efforts to downplay the significance of that fateful June meeting in Trump Tower and their attempt to dismiss Robert Mueller’s inquiry as a partisan witchhunt. It’s bad, Bannon is saying, and even more unforgivably it was stupid. Taking aim at Mr Trump’s own family in the most personal terms makes it all the more biting.

2. Trump ‘befuddled’ by his victory

In an article for NYMag adapted from his book, Wolff describes the amazement – and dismay – in the Trump camp at his November 2016 election win.

“Shortly after 8pm on Election Night, when the unexpected trend – Trump might actually win – seemed confirmed, Don Jr told a friend that his father, or DJT, as he calls him, looked as if he had seen a ghost. Melania was in tears – and not of joy. There was, in the space of little more than an hour, in Steve Bannon’s not unamused observation, a befuddled Trump morphing into a disbelieving Trump and then into a horrified Trump. But still to come was the final transformation: Suddenly, Donald Trump became a man who believed that he deserved to be, and was wholly capable of being, the president of the United States.”

AZ: This is decidedly different from what has been recited by the Trump circle since election night. While campaign hands – at least the less-than-dedicated ones – may have been positioning themselves for a soft landing after a defeat, Mr Trump and his close allies believed in their success. A “horrified Trump” was never part of the script.

“Trump did not enjoy his own inauguration. He was angry that A-level stars had snubbed the event, disgruntled with the accommodations at Blair House, and visibly fighting with his wife, who seemed on the verge of tears. Throughout the day, he wore what some around him had taken to calling his golf face: angry and pissed off, shoulders hunched, arms swinging, brow furled, lips pursed.”

But the first lady’s office rejected the claims.

Communications director Stephanie Grisham said in a statement: “Mrs Trump supported her husband’s decision to run for President and in fact, encouraged him to do so. She was confident he would win and was very happy when he did.”

AZ: These words tell the same story as the viral video clip of a stone-faced Melania forcing a smile when the president looks her way. It also explains why Mr Trump was so insistent about the success of his inauguration and the size of his crowds. He felt slighted and aggrieved and was acting accordingly.

“Trump, in fact, found the White House to be vexing and even a little scary. He retreated to his own bedroom – the first time since the Kennedy White House that a presidential couple had maintained separate rooms. In the first days, he ordered two television screens in addition to the one already there, and a lock on the door, precipitating a brief standoff with the Secret Service, who insisted they have access to the room.”

AZ: For much of his adult life, Mr Trump has lived according to his own rules, as a real-estate tycoon whose wealth allowed his every whim or idiosyncrasy to be accommodated. Adjusting to the White House – which Bill Clinton once referred to as the “crown jewel of the federal penitentiary system” and Harry Truman called “the great white jail” – must have been quite a shock.

5. Ivanka hopes to be president

Mr Trump’s daughter and her husband Jared Kushner allegedly struck a deal that she might run for president in future, according to Wolff:

“Balancing risk against reward, both Jared and Ivanka decided to accept roles in the West Wing over the advice of almost everyone they knew. It was a joint decision by the couple, and, in some sense, a joint job. Between themselves, the two had made an earnest deal: If sometime in the future the opportunity arose, she’d be the one to run for president. The first woman president, Ivanka entertained, would not be Hillary Clinton; it would be Ivanka Trump. Bannon, who had coined the term ‘Jarvanka’ that was now in ever greater use in the White House, was horrified when the couple’s deal was reported to him.”

AZ: The feud between Bannon and “Jarvanka” was no secret, and it certainly wasn’t surprising. In a way, the couple represented to Bannon everything he’s fighting against – East Coast elitism and entitlement. Yet, thanks to familial ties, they had the president’s ear and – this new book claims – harboured dynastic hopes.

The US first daughter poked fun at her father’s alleged “scalp-reduction surgery”, according to the book.

“She treated her father with a degree of detachment, even irony, going so far as to make fun of his comb-over to others. She often described the mechanics behind it to friends: an absolutely clean pate – a contained island after scalp-reduction -surgery – surrounded by a furry circle of hair around the sides and front, from which all ends are drawn up to meet in the center and then swept back and secured by a stiffening spray. The color, she would point out to comical effect, was from a product called Just for Men – the longer it was left on, the darker it got. Impatience resulted in Trump’s orange-blond hair color.”

AZ: It wouldn’t be particularly surprising if this is one of the anecdotes that Mr Trump finds most irksome. The president is proud of his hair, and once notably let late-night host Jimmy Fallon ruffle it to establish its authenticity. On windy days, Mr Trump usually wears a hat – the origin of the Make America Great Again ball cap – to ensure there are no coiffing malfunctions. The hair is as much a part of the Trump brand as big hotels and gold-plated escalators.

But according to the book, Mr Kushner did not have an answer.

“‘Just give me the three things the president wants to focus on,’ she [Katie Walsh] demanded. ‘What are the three priorities of this White House?’ It was the most basic question imaginable – one that any qualified presidential candidate would have answered long before he took up residence at 1600 Pennsylvania Avenue. Six weeks into Trump’s presidency, Kushner was wholly without an answer. ‘Yes,’ he said to Walsh. ‘We should probably have that conversation.'”

AZ: It often takes a new administration a bit of time to find its footing. In Mr Trump’s case, the situation was particularly acute. Having campaigned on some clear policy items – strengthened borders, renegotiated trade deals, a sweeping tax cut and Obamacare repeal – prioritising was clearly a challenge. Once in the White House, he allowed Congress to kick off with healthcare reform, and the difficulties achieving that goal haunted the Trump presidency for nearly a year.

Wolff, who previously wrote a biography of Rupert Murdoch, describes Mr Trump’s high regard for the News Corp media titan.

“Rupert Murdoch, who had promised to pay a call on the president-elect, was running late. When some of the guests made a move to leave, an increasingly agitated Trump assured them that Rupert was on his way. ‘He’s one of the greats, the last of the greats,’ Trump said. ‘You have to stay to see him.’ Not grasping that he was now the most powerful man in the world, Trump was still trying mightily to curry favor with a media mogul who had long disdained him as a charlatan and fool.”

AZ: During the campaign, Mr Trump had at times feuded with Murdoch’s Fox News – fighting with presenter Megyn Kelly, boycotting the network and skipping a Fox-broadcast primary debate. The president, however, is one of Fox News’ biggest fans – and the network has become his greatest advocate since his inauguration.

But the admiration was not mutual, according to Wolff’s account of a call between Mr Murdoch and Mr Trump about the president’s meeting with Silicon Valley executives.

Mr Trump is said to have told Mr Murdoch:

“‘These guys really need my help. Obama was not very favorable to them, too much regulation. This is really an opportunity for me to help them.’ ‘Donald,’ said Murdoch, ‘for eight years these guys had Obama in their pocket. They practically ran the administration. They don’t need your help.’

‘Take this H-1B visa issue. They really need these H-1B visas.’Murdoch suggested that taking a liberal approach to H-1B visas, which open America’s doors to select immigrants, might be hard to square with his promises to build a wall and close the borders. But Trump seemed unconcerned, assuring Murdoch, ‘We’ll figure it out.’ ‘What a f****** idiot,’ said Murdoch, shrugging, as he got off the phone.”

AZ: There’s sometimes been a disconnect between Mr Trump’s anti-immigration rhetoric and his action as a businessman, where his companies often relied on immigrant labour. Perhaps the president-elect was reflecting his business sensibilities. Or maybe, in this case, he was simply echoing the opinion of the last group of people who had met with him – a criticism that has been lobbed his way on more than one occasion.

Former US National Security Adviser Mike Flynn knew that accepting money from Moscow for a speech could come back to haunt him, according to the book.

Wolff writes that before the election Mr Flynn “had been told by friends that it had not been a good idea to take $45,000 from the Russians for a speech. ‘Well it would only be a problem if we won,’ he assured them.”

Mr Flynn has been indicted in the Justice Department special counsel’s inquiry.

AZ: Like Paul Manafort, Flynn was one of the members of the Trump campaign’s inner circle whose prior affairs were not ordered in a way that would, shall we say, stand up to close legal scrutiny. If Mr Trump had been defeated, that probably wouldn’t have mattered. Like the protaganists in the film The Producers, however, their success was their undoing.

Does Donald Trump have a nuclear button?

How Trump cooled on Bannon